So, after weeks of me claiming “Oh yeah, I’ll definitely use brush pens because they make really cute modern calligraphy, I just have to get brush pens somehow because Michaels has, like, none,” I finally mustered the courage to ask my roommate if I can use hers.

Brush pens are a type of pen that has flexible tips so that you can use them for calligraphy. They kind of reminded me of a pen version of my watercolour paint brushes. And, just like my watercolour paint brushes, they were initially hard to use. You have to learn how much pressure is too much, figure out nice ways to transition from you hairline strokes to your thick strokes, so on and so forth.

Again, like I always do, I wrote out the entire alphabet using my brush pens. 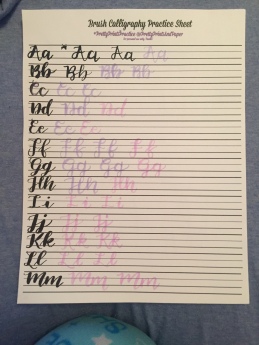 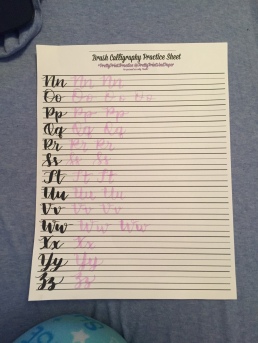 I don’t know if I ever mentioned this, but I did it at the beginning of my learning project journey because, well, I needed to learn how to write out every word. Now I have a much better grasp of calligraphy, but I still continue to write out every single letter with the new tool I have. I do this so that I can get a feel of how I have to use my new pen compared to how I use my other pens. Plus, by writing out my letters multiple times when first giving it a go, I can look back at my practice sheet and quickly see how the letter is supposed to look and replicate it. After writing out each letter individually, I did what I had done in “My Fingertips are Black…”: I wrote out words, making sure that I had written out each letter at least once. Also, since the calligraphy practice sheets have capital letters (something I never thought I would find) I made sure I wrote out each letter in both capital and lowercase at least once. 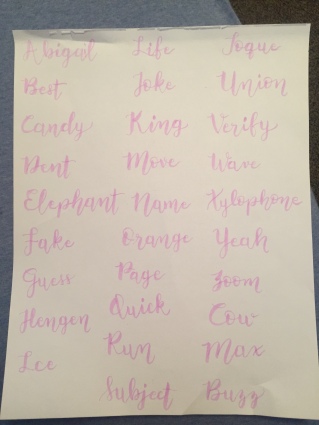 I found the practice sheets on a blog called Pretty Prints & Paper. The blog has many different posts about calligraphy, and the blogger happened to post downloadable calligraphy practice sheets (and I can’t find them for the life of me: I would have hyperlinked the URL into my blog post but, like I said, I can’t find the URL). Using the downloadable practice sheets meant that I didn’t directly use a YouTube video this week. However, I had watched a video previously and linked it in one of my blog posts. The video was about using bubble lettering. I remembered the YouTuber using brush pens, and I quickly skimmed the video to see how she used her brush pens. I did not watch the YouTube video in its entirety like I usually do for my calligraphy adventures because I have gotten the basics on how to do calligraphy–upstrokes are thin, downstrokes are thick, and the font is something that is very easy to learn just by looking and replicating it. I don’t really need a video describing how they do the font. At this point, I can look at a font and just kind of do it.

Anyway, I really loved the brush pens. The ones my roommates have are pastel coloured and I really want to buy them, but as I said before, they don’t seem to exist at my local Michaels store. Like my bullet journal, these pens will most likely make another appearance on my blog, unless my roommate deems me too immature or reckless to use her pens again. If that’s the case then these pens will never see my blog ever again.

3 Replies to “The Brush Pens are Here”

I'm Shaleen Hengen, and I am a second-year University of Regina student in the faculty of education. This blog is (currently) dedicated to my experience using new forms of educational/helpful technology, my calligraphy escapade, and my journey through ECS courses. My plans are to become a secondary math and history teacher (which is an interesting blend of topics, I know), and this blog will help to outline my experience. Feel free to leave a comment on and to share my posts!

Am I Famous Yet?